Mucoceles are slowly growing chronic expancile cystic lesions of the paranasal sinuses lined with respiratory epithelium. These lesions expand concentrically tending to be round or oval. Increasing in size, they cause bony erosion and extend outside the sinus. The findings and symptoms associated with a mucocele depend on its location and on the extent of bony erosion.

Primary mucoceles are formed as a result of obstruction of the duct of a gland in the mucous membrane of one of the sinuses producing a retention cyst.

Secondary mucoceles are formed secondary to obstruction of the sinus ostium leading to accumulation of secretions inside the sinus. The sinus ostium may be obstructed due to chronic sinusitis, nasal polypi, tumors as osteomas, or accidental or surgical trauma.

The most commonly affected sinuses are the frontal and ethmoids either separately or combined as a fronto-ethmoid mucocele. The sphenoid is rarely involved and the maxillary sinus is the rarest involved. As the mucocele expands, the sinus bony walls become thinner and then deficient. Therefore, it exerts pressure on the surrounding structures specially the orbit. Microscopically, a mucocele is lined by cuboidal epithelium; it contains sterile mucus. Pyoceles are mucoceles with inflamed walls.

Patients usually present with a slowly growing painless swelling over the affected sinus. Headache is common and larger mucoceles present with proptosis. On examination, the mucocele is at first hard, then with bone thinning, eggshell crackling is elicited. Fluctuation is found after complete resorption of the overlying bone. Proptosis is directed downward in frontal mucoceles and lateral in ethmoid mucoceles. In fronto-ethmoid mucoceles, proptosis is downwards and laterally. 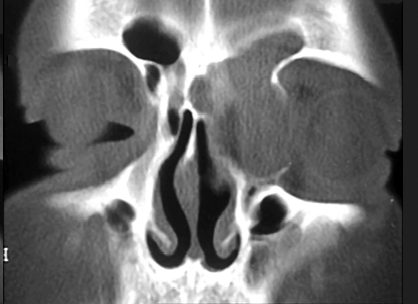 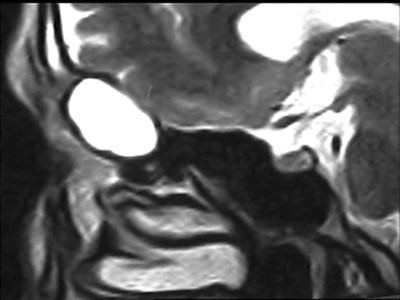 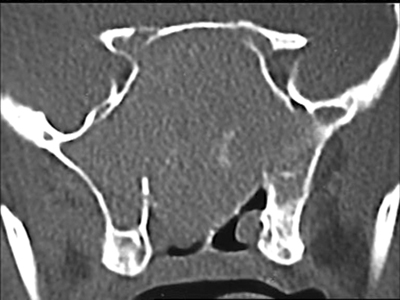 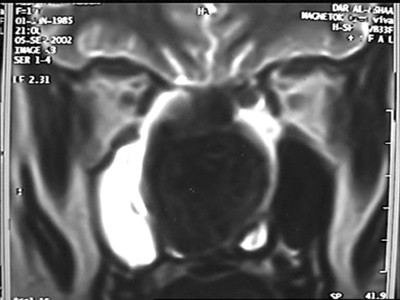