EDCR is performed commonly using general anesthesia. Decongestion of the nasal mucosa is achieved by placement of nasal pledges that contain oxymetazoline 0.05% in the middle meatus, followed by endoscopic injection of 1% xylocaine containing 1:200,000 epinephrine into the lateral nasal wall and middle turbinate.

The point of insertion of the root of the middle turbinate on the lateral nasal wall and the maxillary line are key intranasal landmarks for identifying the location of the lacrimal sac (around 8 mm above the insertion and centered on the line). In patients who have atypical anatomy or a history of sinonasal procedures, a surgical navigation system may be used to localize the region of the lacrimal fossa and sac.

After lacrimal sac localization, the mucosa on the lateral wall is incised using a sickle knife, blade, or electrocautery and is elevated using a Freer elevator. The incision is placed vertically well anterior to the location of the lacrimal sac to allow full exposure of the overlying bone. After the mucosa is elevated widely from the underlying bone, it is either removed with forceps or left attached posteriorly as a flap.

To expose the lacrimal sac, the bony lacrimal fossa must be removed. Its part made by the ascending process maxilla is anterior and thicker than the thin posterior part made by the lacrimal bone. The suture between them is the maxillary line and drilling should commence there creating a bony rhinostomy of adequate size and location facilitates a successful outcome. It is particularly important that the bone overlying the common canaliculus is resected completely. Generally, a rhinostomy with a vertical dimension of at least 6 to 8 mm is achieved in adult patients.

Removal of the lacrimal sac mucosa

After the medial sac wall has been resected, a bicanalicular intubation set is used to intubate both canaliculi, with subsequent retrieval of the probes endoscopically from the rhinostomy site. The tubing is tied in the nasal vestibule in such a way as to allow the appropriate length and tension of the silicone tubing loop in the medial commissure. Thus, the closed loop formed acts as stent for the newly created rhinostomy. The authors prefer to remove the stent 6 weeks postoperatively, but intervals for stent removal that range from 4 weeks to 6 months have been advocated by other investigators

Postoperatively, the patient is placed on a combination antibiotic–steroid eye drop 4 times a day for 2 weeks, and is instructed to perform frequent nasal saline irrigations for 4 to 6 weeks. The patient is seen 1 week postoperatively, at which time lacrimal irrigation and nasal endoscopy with debridement are performed. These procedures are repeated again as necessary. At the appropriate time (around 6 weeks) after surgery, the stent is cut in the vestibule and removed endoscopically in the office.

1- Movie 1:  45 y.o. male patient with right epiphora for one year that failed to stop with conservative management. 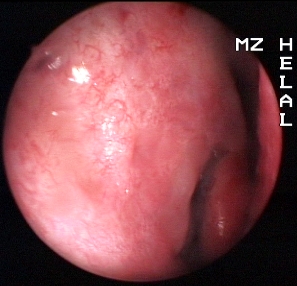